Are there really any non-believers left?

I know I am talking to the believers here...well I hope so.

This information is from 'Get Up'.
They ask that we freely use this graphic and information.
Print, talk, argue, and convince!

The links in the section below (Research and Analysis) could also be used as support evidence in you work of spreading the facts!

...please do scroll right down to see my good news too.

Get used to record-breaking heat: bureau
This article includes perspectives from climate scientists at the Bureau of Meteoroloy on recent hot weather and some international evidence about the changing global climate.


This article provides a useful outline of the connection between climate change and the recent heatwave.


This Special climate Statement from the Bureau of Meteorology summarises the weather conditions during the recent heatwave.


This Climate Commission report summarises the Intergovernmental Panel on Climate Change (IPCC) report on extreme conditions and disasters and deals with the impact of climate change on heat, rain, drought, fire, cyclones and sea-level rise.

The human impact of heatwaves and extreme weather

This report from the Climate Commission summarises research on the impact of climate change on physical and mental health and communities.


This report jointly produced in 2012 by the CSIRO and Australian Bureau of Meteorology provides an updated summary of observations and trends in Australia's changing climate.

CSIRO and the Australian Bureau of Meteorology, State of the Climate - 2012 13 March 2012, CSIRO website.

And...not bragging or anything but I received this cheque from my electricity supplier today: 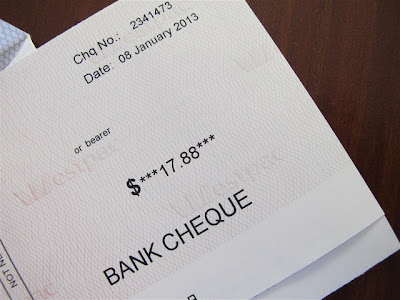 Alright, it isn't huge, but combined with the fact that we haven't paid a single cent for power this year, it is pretty cool - and we have electric cooking and hotwater!  Gotta love solar panels.

This year, we will have to be even more careful about our usage and our usage patterns as the price of electricity from the grid has gone up dramatically.  I wonder if we will get a refund next January?